If you have any photographs or information on the 9th Division that you would like to share with The 9th Divvy (with full credit to you) please don't hesitate to contact the authour Tim Burke at snewinburke@optusnet.com.au 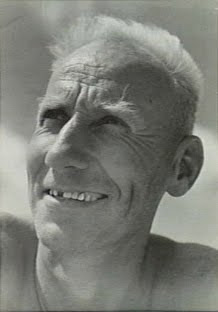 This smiling face belongs to VX3645 Cpl. John Montgomery Munn of the 2/3rd Field Company of the Royal Australian Engineers. The caption with this photo at the Australian War Memorial is simply this;

The combination of these two traits and his missing front tooth ensures that Cpl Munn looks far older than his age of 35 years at the time of this photo being taken in August 1941 at the height of the Siege of Tobruk. The conditions that Australian troops served under in the Western Desert ensured that they aged much faster than normal, especially with their extended exposure to the harsh desert sun. In an era where sunblock and even sunglasses were unheard of the men of the 9th division's skin tanned a deep bronze very quickly, especially with the normal Australian soldier's tendancy to remove his shirt at any opportunity.

Upon their return to Australia in early 1943 it was said that it was quite easy to tell a returned man in a crowd due to their deep suntans. Cpl. Munn is a classic example of this.

Though Cpl Munn survived the rigours of Tobruk and Alamein he wasnt to be so lucky in New Guinea. At 1229hrs on September 24th, 1943 at Finschafen, New Guinea whilst the 2/3rd Field Company was supporting the artillery that was covering the advance of the infantry towards Satelberg a large force of Japanese aircraft consisting of 12 bombers and over 20 fighter aircraft bombed the artillery positions resulting in large casualties in the ranks of the engineers. Cpl. Munn was killed in this attack. He was aged 37 at the time of his death.

Cpl Munn is memorialised on the roll of honour at http://www.awm.gov.au/research/people/roll_of_honour/person.asp?p=533261 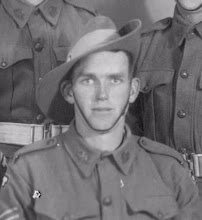 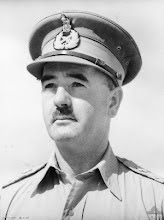 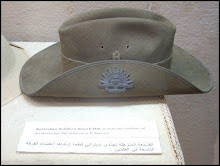 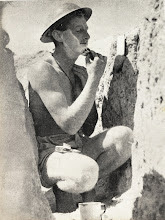